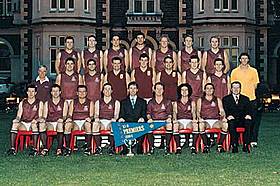 On an Autumn day in 1925, with yet another football season about to begin, F.I. (Dolly) Grey, Senior Mathematics and Sports Master at Prince Alfred College was pondering on the future of the boys about to leave school.  He was one of the quietest of men, exuding humility, manners impeccable and a quality of understanding the problems of those less fortunate than himself.  Academically the most highly qualified member of staff.  In addition to a Master of Arts degree, for a schoolmaster, he possessed a second and unusual qualification, that of a Master of Engineering.  From this Great Man was borne The P.A.O.C. Football Club.

As a part of the Prince Alfred College (PAC) (est. 1869) community, the Prince Alfred Old Collegians Association (PAOCA) is one of the strongest Associations of its type in the Southern Hemisphere.  The School is located at Dequeteville Terrace, Kent Town, Adelaide, South Australia on the eastern fringe of the parklands that surround the city.  The PAOCA has many other sporting Clubs including Badminton, Basketball, Cricket, Hockey, Soccer and Squash.  PAC has also produced some outstanding footballers.  VFL/AFL players – Rick Davies, Craig Kelly, Rodney Maynard, Doug Smart, David Pittman, the Russell brothers (Kym and Scott), Bernie Vince, Ed Lower, Nic Lower and Jack Trengove.  In addition, the School has had numerous others that have gone onto represent the State in the SANFL.

The PAOC Football Club was formed in 1926 and plays in the South Australian Amateur Football League (SAAFL).  The Club is the longest running PAOC sporting club having celebrated its 80th year in the 2005 season.  The first captain of the Club was Frank L. Collison and his deputy was M. Paynter.  In those days the SAAFL (founded in 1911) comprised only one grade (A1).  Today the SAAFL has 65 Clubs fielding 222 teams in 20 grades.  The Club played its first game away at Victoria Park on the 1st May 1926 losing to Marryatville 14.10 to 4.6, 33 people attended the first dinner at the Cathedral Hotel in North Adelaide.  Since then the Club has continually fielded sides in the competition, with the exception of 1941 when the Club merged with Pulteney to field a side under the name of “Collegians Football Club” for just one season before the SAAFL went into recess for the war.  The following are some key events in the Club’s history; 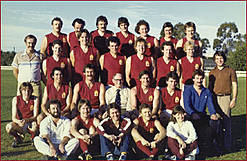 Today our season commences in March/April and the finals are in September/October, if you would like to play in a friendly competition please get in touch, we can accommodate all ages and abilities.  The Club’s home oval is at “Princes Park” (Park 9), located off Bundeys Road, North Adelaide and we practice on the oval on Tuesday, Wednesday and Thursday evenings, starting around 6:00 p.m.  Post match festivities are held in the Front Bar at the Hackney Hotel, 95 Hackney Road, Hackney.  The Club has 4 teams in Division 1, Division 1 Reserve, Division C1 and Division C5.